Ghrta or pure Desi Cow’s A2 Ghee is not just Gold Standard for your health but a number of parallels can be drawn between Ghrta and Gold.

A. Both have limited supply but plenty of fake substitutes – There is only a limited supply of Gold on earth, but Gold imitation products abound in plenty. Similarly traditionally made desi cow’s A2 ghee or Ghrta is rare owing to the derth of pure breed desi cows and her milk. But so-called commercial ghee or clarified butter from adulterated A1 milk of cross-bred cows using cream separation method is in oversupply. 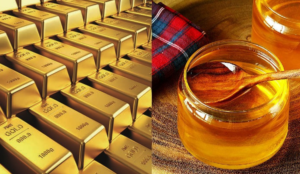 B. Both incur heavy cost of extraction – Cost of extracting an ounce of Gold is almost 85% of its trading price. With no real substitute for pure Ghrta, its cost of production needs to be reviewed thoroughly.

Apart from precious ahimsak A2 milk the processing cost of labour in boiling milk in high grade 304 SS containers, making curd, churning of curd using low RPM bilona method, extraction and washing of butter and slow heating of the same to make Ghrta is perfection.

This makes the cost of ethically produced 1kg ghee from grass-fed desi cows using traditional method nearly the same as the price of 1gm 24-carat Gold.

C. Both are most valued by women – If the most prized possession of a woman outside her kitchen is Gold, inside the kitchen it is Ghrta. She uses the golden-yellow liquid as the final adornment for her food apart from the many therapeutic purposes it serves.

D. Value of both increases in times of crisis – Just as how Gold value increases in times of political and economic crisis, Ghrta comes to rescue in times of health and mental crisis. Infertility, high cholesterol and joint pains are common problems primarily due to non-consumption of healthy fat. 2 tsp of slightly-warmed Ghrta not just helps avoid hospitals but also reduce weight and get a radiant skin, healthy hair and gut. During Covid times, AYUSH recommended consumption of Ghrta as nasya and oral to boost immunity against the virus. 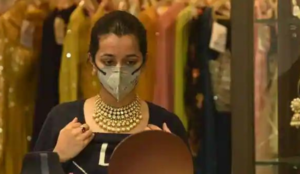 E. Asset value of both increases with time – Gold has historically been in a bullish mode since time immemorial. Similarly, the value of Ghrta always increases as it ages. After about 1 year of making Ghrta, it changes from ‘aahar’ or consumable to an ‘aushadi’.or medicine. A decade or century old Ghrta or Purana Ghrta, can reverse severe skin problems, mental health issues, diseases of the head, eyes, ear, and diseases related to the female reproductive system! The value and usage of Purana Ghrta can be known from any Ayurvedic doctor.

Ghrta is a real investment that needs to be passed on from one generation to another, just like Gold. It comes to rescue at times when even money cannot buy health.